Me, Meyer, myself and I

As the mysterious Mr Meyer, HOLBY CITY’s heart-throb head surgeon, GEORGE IRVING has sent pulses racing. But, as he tells LYNDA LEE-POTTER (pictured), coping with his mother’s illness made him wonder where his character ends and his own personality starts.

George Irving has been voted one of the sexiest men on television. He’s the six-footer who stars as brilliant surgeon Anton Meyer in the BBC’s hospital drama Holby City. It’s now in its third series and has turned George into a heart-throb. We meet for tea at London’s Berkeley Hotel and posh Knightsbridge beauties can’t keep their eyes off him. ‘That wasn’t Mr Meyer was it?’ asked a slender sleek blonde after he’d left. The surgeon he plays is so powerful and awe-inspiring that even real-life doctors confuse the actor with the character. Anton Meyer is devastatingly attractive, brusque and autocratic. He’s the kind of domineering, unsmiling hero who made Mills & Boon heroines swoon. The popularity of the character proves that women are still attracted to brooding chaps who take total control and never use a superfluous word.

Neither of us eats a morsel. This is because I feel I’m in the presence of the driven, terrifying Mr Meyer, while George, who is new to the interviewing game, is wary of being asked intensely personal questions by a hack he’s just met. However, after more than 20 years as an actor who has always been well-known within the business, George Irving is learning to cope with fame. He even thinks he’s growing to like it. ‘I love getting fan mail. I care very much whether people like my work or me. I’ve managed to hang on as an actor during times when things weren’t going very well, when you feel undervalued, which is an occupational hazard. Most actors have to learn how to deal with rejection.’ 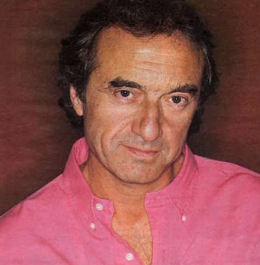 He spent the early part of his career playing baddies who get their comeuppance. In one year he died on screen five times in differing roles. He has aristocratic, rather foreign good looks but actually comes from a close-knit Northeast working-class family. His father was a surface worker at the local pit and he grew up on a council estate in South Shields, County Durham. Until he went to university he had a strong Geordie accent. He talks to his father on the telephone most days and as soon as he hears his voice he slips back into the dialect of his childhood. His three sisters still live in the North and they are certainly not, he says, the kind of siblings who think it’s wonderful to have a famous big brother. ‘They’re irritated by it all really, to be honest. They’d say there’s no praise they could give me that I don’t already know.’

His character Anton Meyer is from a totally different background and television viewers know little about his private life. But he’s a totally real person to George and the actor talks about his alter ego with protective passion. Week by week as he develops the role, he feels he knows more about the taciturn surgeon. ‘Anton’s parents were Hungarian intellectuals,’ he says. ‘They fell foul of the new regime in 1957 and had to get out of Hungary after the uprising. They came to Britain with their son when he was seven, but they never really adjusted and died of broken hearts. That gave him the early drive towards making people better. Meyer’s greatest critic is himself; he drives himself as hard as he drives everyone else.’

George himself has been married for 25 years to theatre director Jan Sargent. They met in rep in Newcastle where she directed him and they had a prickly relationship until they realised they’d fallen in love. ‘We sort of repelled each other at first. We’re both strong-willed and we found each other a bit forbidding. It was a very slow burn. Perhaps that’s why it’s lasted as long as it has.’ They have a 21 year-old daughter, Lucy, who works in PR and still lives at home. However, like Meyer, George is a loner at heart and often goes back to the Northeast to walk the hills and wild coastline he knew as a child. ‘It’s a beautiful part of the world, and I miss it in many ways.’

Every Sunday when he was a boy, he and his Catholic family went to Mass and at age 11, he became an altar boy. He also had his first intimation that he loved performing. ‘At 12, I was on the verge of going into the priesthood. There’s a bit of a priest in Meyer as well. Surgery isn’t just a physical activity that he’s engaged in, there’s a spiritual dimension. 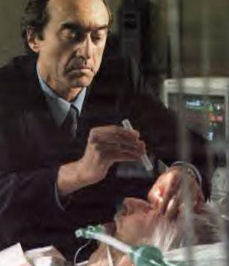 George then went to a strict Catholic grammar school where beating was an everyday occurrence. ‘I was a very good boy but we were beaten for the tiniest misdemeanours -for late homework, for being inside when it was sunny. If you were supposed to be in the playground and you were caught in the building then the whole class would be beaten. I was beaten for smudge marks on a piece of drawing paper – I’ve been put off drawing for life by my experiences in the art class. The beating was random. With one or two exceptions, they truly believed it would do you good. However, there were a couple of sadists.’

Joining a local youth drama group made him realise he wanted to go into the theatre and after A-levels, he went to Birmingham University to read drama. He was the first person in his family to go into higher education and his parents made financial sacrifices to enable him to do so. ‘I didn’t tell them I was going to be an actor for a long time, although I think they knew. They’d seen me doing stuff for the local youth theatre, and they realised that I was pretty keen. I was completely supported by them, which is an astonishing achievement really. Privately they must have been quite concerned about it.’

When George left university the first job he got was in a commercial for Worthington Ebitter. ‘Six men had to walk into a bar and it took over a day of filming. We drank from nine o’clock that morning until two o’clock the following morning. You had to drink the real thing because the advertising standards regulation was that you couldn’t be drinking a fake product. They put Alka Seltzer in the bottom of the glass before they put the beer in because that gave it more of a head and it looked better on camera. I’ll never forget it. I was in bed for two days afterwards. There was one point when the actor standing next to me was doubled up with pain.’

George’s three younger sisters and father still live in the Northeast but sadly his loving mother Nell died just as her son was on the threshold of fame. ‘She had a chronic form of leukaemia. She survived for six years after the diagnosis. She just decided that the illness wasn’t going to get her, so she never gave in. I do believe that makes a difference to how long people survive. I was there with my father when she died and I’m so glad I was. My parents complemented each other terribly well. They were as strong as each other in different ways. I got a very strong moral sense from my mother as well as from Catholicism.’

George’s mother spent her last few weeks in a side ward at Sunderland hospital. Meanwhile, at work, George was playing the God-like surgeon who has power over life and death. He’d leave rehearsals to travel north and sit by his mother’s bed. ‘The haematology department at Sunderland is superb with great staff, so that was a blessing. I was there a lot as my mother was getting progressively more and more ill. And so the nursing staff knew me very well. The first series of Holby had been shown and one day I was standing at the nursing station. A local GP came up to me and asked if there was a problem with one of my patients. He thought I was Meyer. My mother was very ill and I wasn’t feeling at all in control. So having a doctor treat me as though I were this empowered surgeon was very strange. But in a way it gave me strength. It helped me find the carer within myself to look after my mother and my family.’ 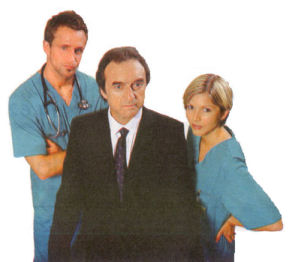 George sat with his mother, hour after hour. ‘She just looked at me,’ he says. ‘There weren’t many words but there were very full silences. While she was ill I felt like the parent, and when she died I was a child. I found myself thinking, “How did I end up this person who lives in London?” You realise how much of your life has been in response to your parents. Bereavement always surprises people in terms of their own reaction. You can’t predict how it’s going to affect you, and it catches you unawares. It amazed me that I felt as young as I did. All the veneer that we develop as adults just flaked away. It’s very thin insubstantial stuff compared to the central feeling that you have for a parent.

‘In one sense I feel my mother is still around. But I felt her spirit leave her body the moment she died. It was utterly unmistakable. I had no problem walking away from the side ward where she died almost immediately because she was no longer there. It was absolutely apparent that she was gone. She was 73, which isn’t old, is it? ‘

George’s mother was cremated and her ashes are buried near her home in South Shields. ‘My father’s a very emotional man and it was always going to be a huge adjustment when she died. But my sisters are still there, and they live very near. He’s got a lot of support and he’s doing all right.’

His family is not demonstrative, either verbally or physically, but George did tell his mother that he loved her. ‘There is something special about being an only son, though love is not a word that came easily within my family. It’s easier now to use the word because when a parent dies you are very aware of your own mortality. You realise that there is no time to waste. You really do have to say what you believe and to get on with your life; it’s not a rehearsal.’

George has been fortunate in that his current role reflects some of his early interests in life. At school his academic leanings were all science-based and he’s fascinated by the medical side of his part. ‘Before we started rehearsals I went to Papworth Hospital and watched some operations. I was warned that some people can’t take it and that if I began to feel a prickling across my brow it meant I was going to pass out. “if that happens,” they said, “you must take two steps back from the table.” But I was absolutely enthralled by what I saw. I could watch operations all day. I found it very beautiful. I was intrigued by it. I loved it. It’s miraculous what goes on inside your chest.’

The longer he plays Mr Meyer, the more his own character is seeping into the role. ‘I am finding that some of my traits are occurring in him. The minute I got the first script I immediately felt at home with him. I knew instinctively how he moved, how he spoke, what he felt. I could feel his heartbeat.’