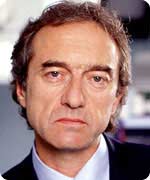 Holby City is back for a staggering 50 week run with blockbuster storylines including a road rage shooting and date rape.

In the opener on BBC1 on October 9, surgeon Anton Meyer (George Irving) needs life-saving surgery after he is shot by an angry motorist.

George Irving was upset when he found that his character was to be shot.

George, 48, the only original member of the cast, says: “It was a very unpleasant experience filming the scenes as I have played the character for three years.

“Lying horizontally for so long was strange and members of the cast and crew treated me like a sideboard – putting cups of coffee on me!”

But George is no stranger to previous TV shootings.

He says: “There was one year when my daughter Lucy was very young when I banned her from watching me on TV as I was shot five times in 12 months!

“They were cops and robbers type shows such as The Professionals. They do not make them like that anymore.

“The worst thing about being shot in Holby this time was that my character Meyer loses his spleen.”

Much of the abdominal surgery to save Anton Meyer’s life will be screened in gory close-up by BBC1.

BBC bosses have refused to tone down the plethora of blood and guts in the new series of Holby City, as they insist fans love the gore.

BBC drama chief Mal Young says: “Fans do not want us to be coy, they want us to be quite graphic. I am amazed at how de-sensitised audiences have become. But people love it – they even eat their dinners, watching the operations.”

George Irving says he is quite similar to his Holby City character surgeon Anton Meyer.

He explains: “He is a purist and a perfectionist in terms of his job and I have been accused of that.

“I guard my private life in a similar kind of way to him, though not as jealously as he does. And people do tell me that like him I can be quite frightening on occasions. I do like him, I envy his certainty and his sureness.”

While Holby City has made George Irving something of a household name, he has actually been acting for more than 20 years.

His TV career began in the ’70s with When The Boat Comes In. He was also in The Sweeney, Juliet Bravo, Boon and Bergerac.

More recently George, who lives in East London, was in Wing And A Prayer and Dangerfield. He says of his Holby character Anton Meyer: “I will play him for as long as I enjoy it.”