All My Sons Review 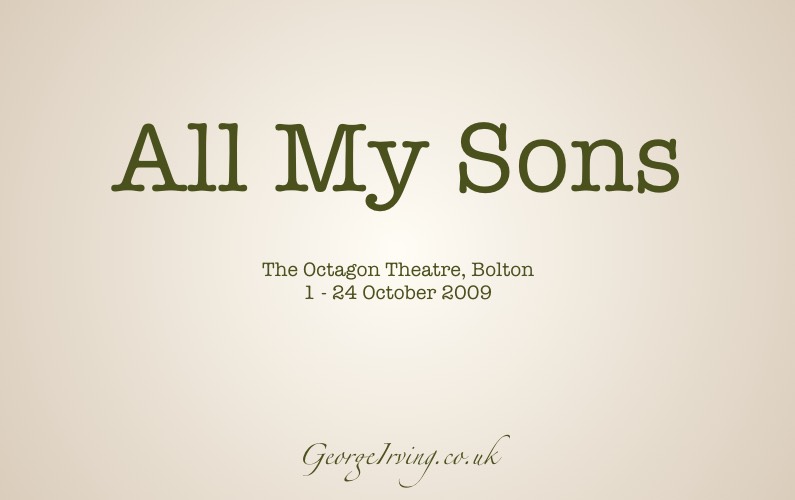 All My Sons is one of the most celebrated plays of the twentieth century and brought Arthur Miller his first major success as a playwright on it’s opening in 1947.

Certainly a fitting work to mark the debut at the Octagon of new Artistic Director David Thacker, the pre-eminent Miller directorial authority who directed many Arthur Miller plays during his close working relationship with him.

Based on a true story relayed to Arthur Miller by his mother-in-law from an Ohio newspaper it draws inspiration from two distinctly separate sources, literature and history.

Ibsenesque in origin, drawing on concepts from The Wild Duck (1885), All My Sons vividly portrays the ethical issues faced by ordinary citizens in the aftermath of the Second World War. 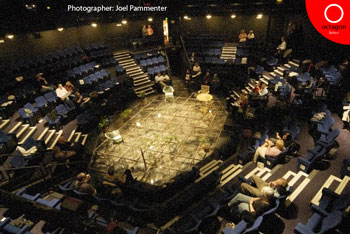 A perspex floor raised the cast to the level of the front row of the audience and allowed subtle uplighting to play on a cloth representative of the arid earth in the Keller’s back yard. Designed by Patrick Connellan, with lighting by James Farncombe, the set was suggestive of the era sufficiently to enhance the production but not detract from or overwhelm the character driven piece.

Played in the round there was no physical house but the suggestion of it’s presence was sufficient to augur it’s existence. While the token props amounted to little more than four chairs and a fallen apple tree the minimal stylized staging encouraged the focus to be placed on the dialogue and characters involved.

As the lights dimmed the cast appeared from all sides of the stage and took up their initial positions. Full use was made of all the access points to the central stage throughout the production with copious entrances to and exits from the stage by characters made in all directions creating an impression for the audience of being part of the initially genial and subsequently fraught gathering. The stage wasn’t so much close to the audience as merged with it. 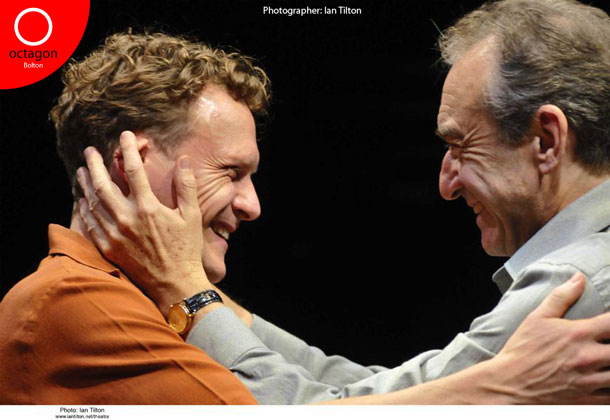 An examination of the father/son relationship is a recurring theme in the works of Arthur Miller and it’s examination provided a rich vein of inspiration for him. The potential for generational divergence and a clash of ideologies in such relationships is huge but this is not the only theme evident.

Many themes permeate All My Sons, social responsibility, facing the consequences of past actions, idealism, guilt, denial, blame and trust.

The entire cast are to be complimented on the mastery of their accents for while both enduring and nomadic in relevance the setting and locale in this production are faithful to the original work being set in a traditional back yard in the outskirts of a generic American town. 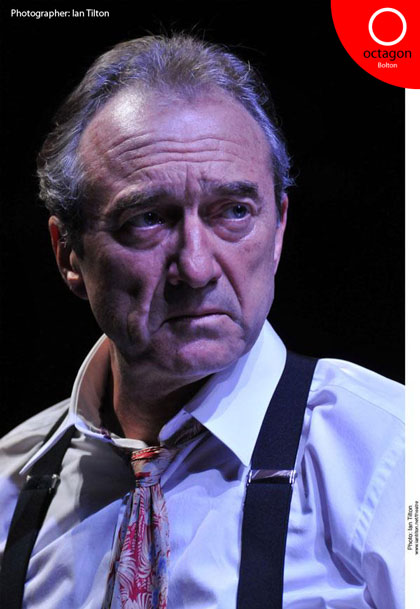 Returning to the Octagon after his award nominating performance in Shining City in 2007, George Irving plays the patriarchal pivotal figure of the piece Joe Keller.

George manages to perfectly pace the transition of the character from affable but shrewd self made businessman to slowly reveal the less honourable side to his character, steadily revealing the tragic character flaws that both define him and will ultimately lead to tragedy.

He is equally excellent with the charming and gregarious nature Joe displays prior to the arrival of George Deever, in the early part of the second act, culminating in an impromptu rendition of a lighthearted song and the more weighty tenor of the remainder of the play.

Joe, driven by a conviction that providing for his family is acceptable at almost any cost the character demonstrates that he lacks a true understanding of the responsibility he bears to others beyond his immediate family. Having convinced himself that his need to provide for his family outweighs everything else he managed to use pure temerity to complete his reintegration back into the local community.

As the realization of the magnitude of his character’s mistakes becomes clear George comes into his own and is outstanding. The evaporation of Joe’s confidence and self-assurance as his denial crumbles is intensely powerful.

Oscar Pearce’s astute portrayal of a son faced with a level of callousness he didn’t believe his father to be capable of is wonderful. Inwardly scarred from his experiences during the war Joe’s son Chris exhibits an ethical dimension that extends beyond his family. For him social responsibility is a moral imperative and it’s his adherence to this principle that places him in direct confrontation with his father.

It is the destruction of the blind faith he had in his father that precipitates the violent encounter for while Joe claims to be no worse than the next man the friction between the two is based on Chris’s belief that his father is better. 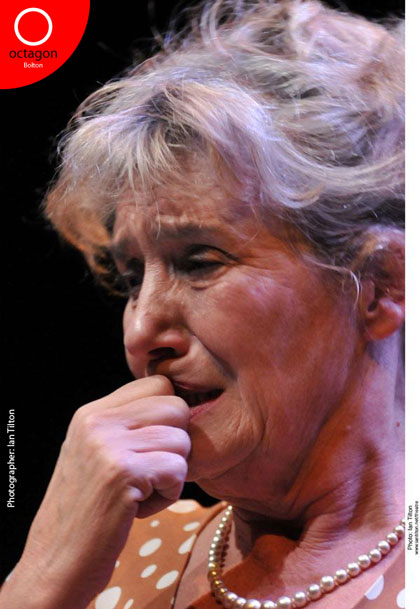 Kate Keller was a role Margot Leicester could have been born to play, she is simply magnificent as the emotionally fragile Mother with a root strength of purpose that reveals itself only gradually throughout the piece.

While prima facie the role of Kate is less central than that of Joe and Chris she is actually the ruling force within the family, a fact amply demonstrated by Joe’s jovial assertion that “I wear the pants and she beats me with the belt”. He and Chris defer to her wishes on several occasions, she is party to Joe’s deception and steadfastly protects the family’s dark secret.

Played with a perfect level of emotion you are drawn in to feel the agony of the character as her obdurate refusal to believe her is son dead is undermined and finally destroyed.

All My Sons marks the professional debut of Vanessa Kirby and she was positively stunning. She managed to strike a perfect balance between companionable naiveté and spirited determination in her portrayal of Ann. A completely captivating performance.

While the neighbours echo a chorus commenting on the proceedings they are also intrinsically part of the events reflecting variations of the main themes of the play.

As neighbours of the Keller’s the tension between the Jim Bayliss (Patrick Poletti) and his wife, is palpable, evidently a result of their vastly conflicting expectations. Sue (Francesca Ryan) displays only antipathy towards her husband’s desires repressing them under her own aspirations.

Jim struggles with the sacrifice of the idealistic medical research career he craves subjugating it to the responsibilities of roles as husband, father and local Doctor.

While Jim acknowledges his situation Sue attempts to control her circumstances and extends this dominance beyond her husband. In her encounter with Ann, in an attempt to coerce her preferred solution to a problem only she is cognizant of, she employs disingenuous manipulation and is met with a steelier resolve than she anticipated.

Although playing only a minor role in the machinations of the Keller clan the Lubley’s add a light hearted humour and cheerful geniality to proceedings in stark contrast to the other characters. Frank (Huw Higginson) is an affable participant in several scenes although he seems somewhat oblivious to the prevailing mood as he barges in with gauche assertions, while Lydia (Tammy Joelle) is a bubbly, vivacious character.

Having successfully avoided the draft Frank is not only years ahead in his civilian life than either Chris or George he is also considerably less emotionally burdened than they are.

The Lubey’s life is representative of the success of the American dream. 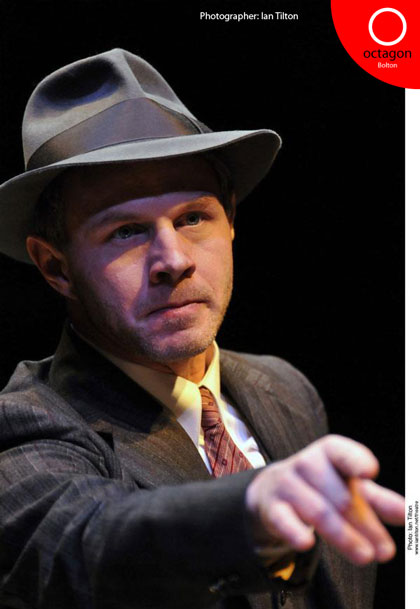 The arrival of Ann’s brother George (Mark Letheren) marks a decisive turn in the play and precipitates a radical mood change, he challenges the accepted view of events and perceived facts.

In a single catalytic scene, from which there is no return, George bowed by his wartime experiences arrives driven by rage and a desire to rectify an injustice, but torn between rectifying that injustice and the tantalising prospect of regaining a semblance of his old life though he vacillates and is very nearly persuaded that his previous life can be re-established to a certain degree.

The carefully crafted and perfectly paced production culminates in a stunningly powerful, passionate and explosive third act which left the audience gasping in shock.

With a classic production of one of the best plays of the twentieth century, a superlative cast, under the deft touch of an expert director the Octagon have unquestionably got a first-rate hit on their hands.

The themes of the play are continued in the Octagon’s William Hare bar with an exhibition of images from recent years serving as a reminder that the issues raised in the play are not a relic of history but are just as searingly relevant today. One in particular shows a long cortège of coffins draped with Union Jacks depicting the repatriation of the fallen in Afghanistan. A stark reminder if any were needed that the work of Arthur Miller is as timeless as it is apposite.

Many leaving the theatre that night were still discussing the issues raised long after the figurative final curtain.

Maybe we would all benefit from considering to what degree we are prepared to compromise our idealistic lives. To what extent do we need to mask the reality of our lives to be able to enjoy life?

We ignore the issues presented within All My Sons at our peril.

A high quality production that excels in every way, Arthur Miller would have been proud.